on October 05, 2009
During my upcoming trip to Europe, I will have the privilege of speaking with the management of London's venerable Savoy Hotel, which is presently undergoing an extensive face lift.

My first visit to The Savoy was in 1989 when British Airways "relaunched" its First Class service with the help of The Savoy and executive chef Anton Edelmann. Certainly, I knew of The Savoy before that although, as a young man of very modest means, I'd never had the opportunity to actually stay there. 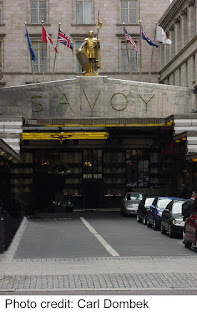 But in 1989 -- the 100th anniversary of this wonderful, old hotel -- a number of my fellow journalists and I were treated to a private dinner at the hotel and were uniformly blown away! I was seated next to Georgia Hesse, the vaunted travel writer from the venerable San Francisco Chronicle, who enjoyed Chef Edelmann's fare (I dare say) nearly as much as I did.

Some years later, in 2001, I convinced my bride to leave the U.S. and venture to the shores of England in large part because I was taking her to The Savoy, a place where she could feel comfortable and secure.

Now, some 20 years after my initial visit, I will have the opportunity to speak with the management of this wonderful, old hotel as it is undergoing a £100 million renovation.

While I have been advised that access to the hotel itself will be quite limited, as "the contractors have control of the space until closer to handing the project back to (the Savoy) early next year," I will take what photos I can and report my findings here on TheTravelPro.