"We Gotta Get Outta This Place" Pt. 2

on September 24, 2009
Reservations have been made for my trip abroad, so the wanderlust has been quelled...at least for now.

After spending far too many nights "sleeping on it," I called American Airlines' AAdvantage Desk and booked my round trip to Amsterdam. As I noted in a previous post, the trip involves flying American's partner airlines, so I couldn't book the trip on line, which is always my personal preference.

On the plus side: I got through the dreaded "voice response" system and to an actual human fairly quickly on all three calls. All of the agents with whom I spoke were friendly, knowledgeable, and helpful.

Also on the plus side: American allows a layover of up to 24 hours in a connecting city without additional charge, so I'll be spending a night in London on my return trip. It could have been longer for an additional 10,000 miles if a seat had been available in steerage. But all the economy seats were taken and I wasn't willing to pony up an additional 20,000 miles to ride in Business Class for a little over an hour between AMS (Amsterdam's Schiphol Airport) and LHR (London's Heathrow Airport). 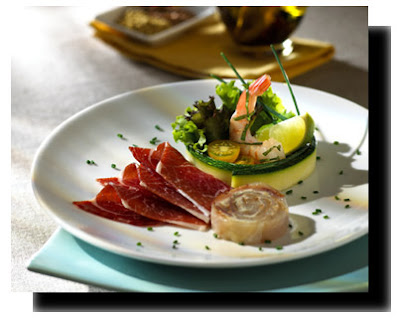 Even more on the "plus" side:I'll be flying Iberia Airlines from ORD (Chicago's O'Hare Airport) to MAD (Madrid, Spain's Barajas Airport), then on to AMS. I've never flown Iberia before, and I'll be in Business Class, so I'm looking forward to experiencing (and reporting on) the food (above) and the service (below). 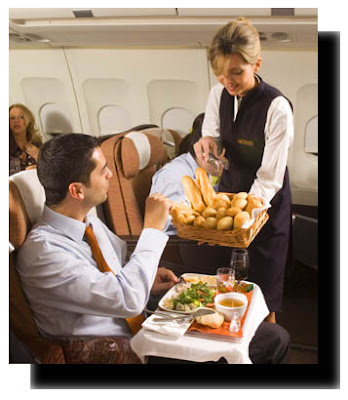 Finally, as Three Dog Night intoned, I've "Never Been to Spain" (though a four-hour layover at an airport barely counts). However, my route through Madrid means my trip will be a bit longer than optimal.

On the "minus" side: Because I spoke to a real, live person, I was charged an additional $20 to book the trip. Because I had no choice but to speak to a person, I don't believe I should have been charged. But it's the airlines' ball, and they make the rules to suit them. To that point, see this article from MSNBC travel columnist Christopher Elliott.

Travel preparations have therefore begun in earnest, and I'll have more in subsequent posts.

SPECIAL THANKS to Iberia Airlines for providing the photos and permission to use them here.
Click on photos to view larger images