That is the result of the second annual Switchfly Hotel Reward Payback Survey. The report, released Oct. 5, revealed that Wyndham Rewards returns an average of 13.6 percent from room night spending as value that can be used for a future stay. That means Wyndham Rewards members earn, on average, $13.60 in value toward a future stay for every $100 spent.

The Marriott Rewards program, which topped the first survey, returned the second-highest value at 9.0 percent this year, marking a slight decline from 9.4 percent last year. Choice Privileges, which is new to this year's survey, ranked third at 8.5 percent followed by the Hilton HHonors program, which returned a value of 7.7 percent. Hilton was followed closely by the InterContinental Hotels Group’s IHG Rewards Club at 7.4 percent. The program ranked the lowest was Starwood’s Preferred Guest (SPG) program, which returned 5.6 percent reward payback. 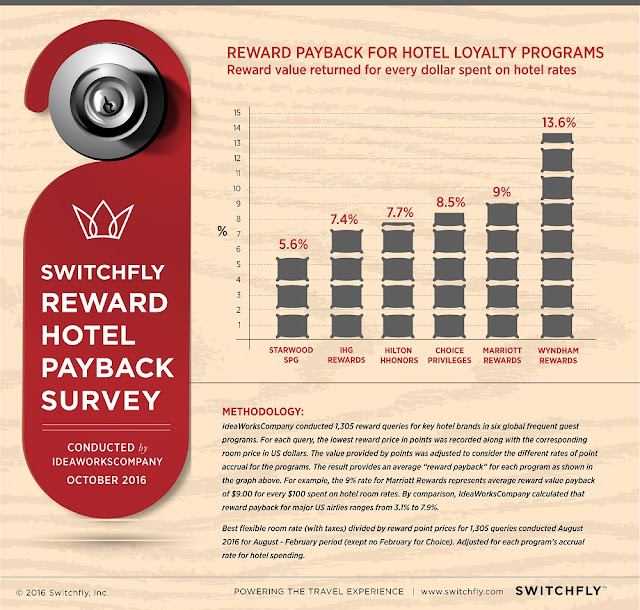 All four of the programs measured in the 2015 survey showed a decline in reward value year over year. As did Marriott's program, Hilton HHonors also saw a 0.4 percent drop. Cellar dweller Starwood dropped 0.5 percent while the fifth-place IHG Rewards Program experienced the biggest decline of 1.2 percent.

Although the Mariott-Starwood merger was completed on Sept. 23, their loyalty programs remain separate and will likely not be merged until "some time in 2018," a company representative told TheTravelPro. In the meantime, members can take advantage of reciprocal benefits across the two programs.

During August 2016, IdeaWorksCompany conducted 1,305 reward queries for key hotel brands in six global frequent guest programs: Choice Privileges, Hilton HHonors, IHG Rewards, Marriott Rewards, Starwood SPG, and Wyndham Rewards. For each query, the lowest reward price in points was recorded along with the corresponding room price in U.S. dollars. The value provided by points was adjusted to consider the different rates of point accrual for the programs.

A math teacher of mine was fond of illustrating the relative value of averages by saying, “You can drown trying to wade across a lake an average of three feet deep.” The same illustration can be applied to “average reward value”: the real value is determined by when and where you want to stay and how much that stay will cost. IdeaWorksCompany recognized that in its survey and provided a comparison of the extremes.

The best reward payback under the hypothetical scenarios was for a December 2016 stay at the Wyndham New Yorker. While booking a room for Dec. 10 would cost $587, it could also be booked for a very modest reward night price of 15,000 points.

"That combination, and the Wyndham Rewards base accrual rate of 10 points per dollar spent, delivers a very generous reward payback," the report's author said, noting that the percentage return in that scenario was a whopping 39.1 percent.

Among the worst reward paybacks in the U.S. was at the Westin New York Grand Central, which offered a room rate on Feb. 18, 2017 or $253 but maintained its 25,000 reward night point price, resulting in a return of a mere 2.0 percent.

The take-away lesson is to do your homework. Do the basic math for the hotel chain you’re using, take into account your particular earning style, and determine the value you’re getting for your points.